Seals and inscriptions on Chinese painting

Han Gan, a leading horse painter of the Tang dynasty (618–907), was known for portraying not only the physical likeness of a horse but also its spirit. The numerous seals and inscriptions added to the painting and its borders by later owners and experts are a distinctive feature of Chinese collecting. The addition of seals and comments by later viewers served to record a work's transmission and offers vivid testimony of an artwork's continuing impact on later generations. - The Metropolitan Museum 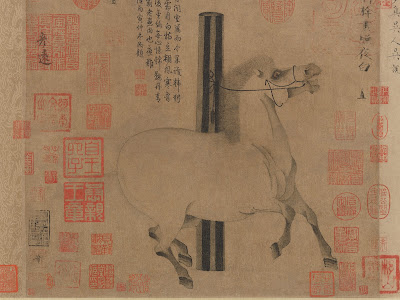 Chi Zhang
Edinburgh, Scotland, United Kingdom
Chi Zhang, an Edinburgh based Chinese Calligraphy / Brush Painting artist,experienced art tutor. Chi has been shortlisted of ‘Sky Art Landscape Artist of the year 2015’. His Chinese calligraphy has been projected onto Edinburgh Castle during the 2015 Edinburgh Military Tattoo and his Chinese landscape paintings have been exhibited in the Scottish National Gallery Academy Building in 2012 and 2013. With growing interest in China and the art forms of China, Chi has taken part in numerous culture events with the institute; he delivers workshops, live performances of Chinese calligraphy and public demonstrations. He performed in the Edinburgh’s Scottish Story Telling Centre in 2008 and later in the National Museum of Scotland in 2009. Chi also provided calligraphy frontispiece for all the translated poems in ‘Selected Poems by Robert Burns in Chinese Translation’, which was published by the Edinburgh University Press in 2010.

Should you be interested in purchasing one of my originals, prints or offer commissions, I would be delighted to discuss things further if you kindly let me know your requirements via email.

Workshop and demonstrations can also be arranged. Please ask for more details.